ON-MARKET PROSPECTING AND SELLING WITH A SECOND ESTATE AGENT

Get an insight into the latest property-marketing trends with our resident content-marketing expert, Ben Metheringham. Discover how to use content marketing effectively to generate more valuations, instructions, and financial service revenue from targeted property campaigning.

Last year, reports suggested that around 60% of properties ended up being sold by a second agent. So this week, I wanted to look at some examples of how agents are commuincating with on-market sellers to win more secondary instructions, and how these examples tell a story that addresses the pain points that sellers experience.

First, some context. The property Market Index shows that the UK market remains buoyant. SSTC has remained well above 55,000 for the last five weeks, with new properties coming to market holding above 70,000 per week for the last three weeks.

There is continued enthusiasm from agents; both sales and new instructions are up. However, whilst it’s a great time to make a move, the economic climate also grows more worrying.

At the same time, fall-throughs reached their second highest rate in 24 weeks last week, and withdrawals have remained above 9,000 for the last three weeks.

It is important to celebrate the fact that agents are busy right now. Many agents will not have time or the headspace to accommodate for what’s to come in the future. However, we must reasonably expect a slowdown in activity towards the end of 2020. Pre-planning for this now will stem the panic later down the line when it comes to building pipelines for the future.

There will inevitably be a backlog of frustrated sellers that will be forced to make a move to another agent in the coming months. We expect that Q2 of 2021 will be tough quarter for some agents too. As the government’s economic incentives come to an end, it’s really important that agents are putting themselves in the strongest position possible to prospect effectively in what will be a highly competitive market in 2021.

So, with this in mind, let’s take look at how a ‘typical’ on-market prospecting journey plays out from the point of instruction, paying particular attention to the key narratives at work within some of the recent sends that I’ve seen.

NEW INSTRUCTION: “PRESENTATION MAKES ALL THE DIFFERENCE AT THIS STAGE” 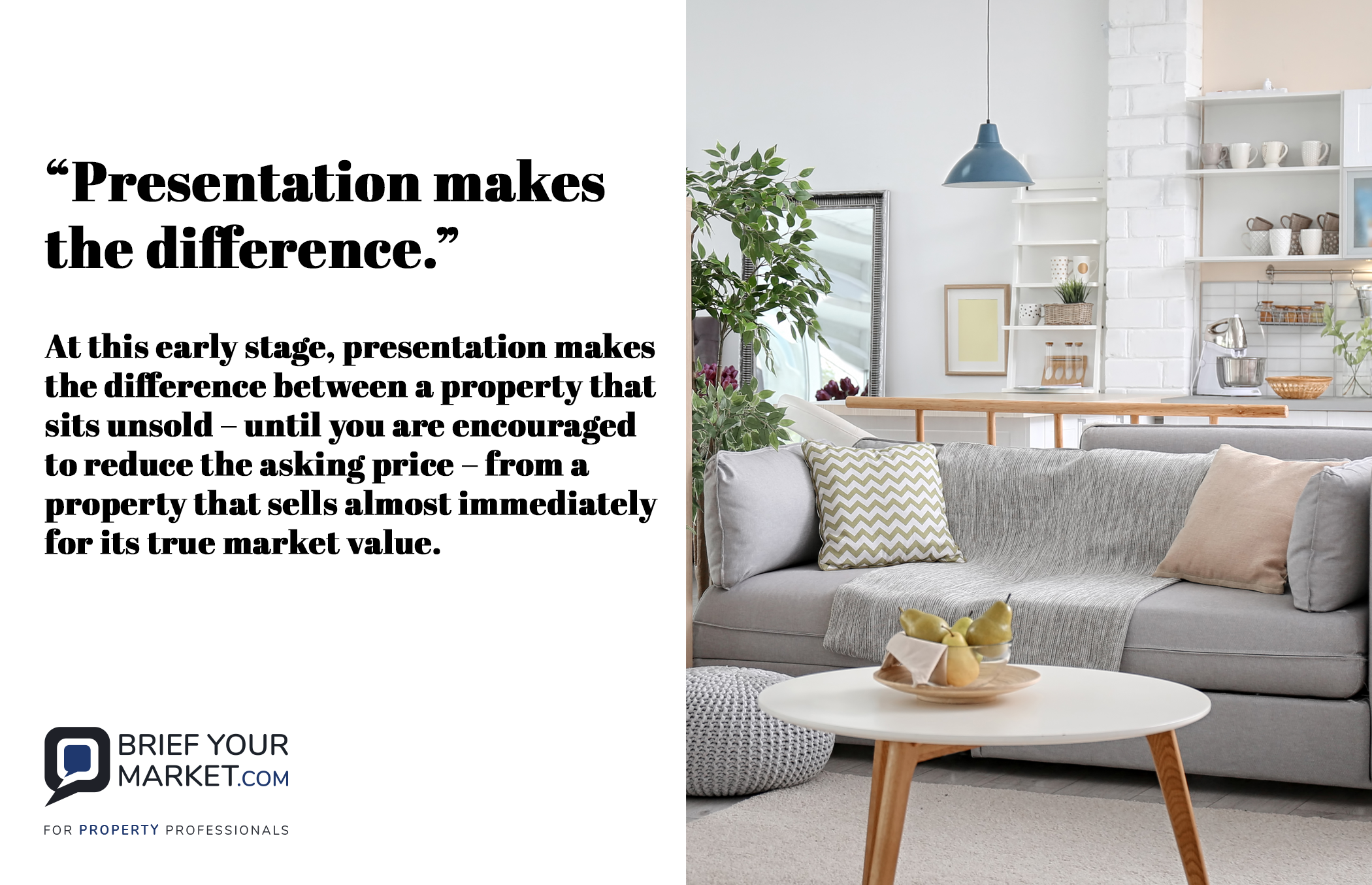 The seller is over the moon at this stage; confident in their choice of agent and 100% happy.

Is it worth sending them a helpful reminder of your services at this point? Absolutely – especially if you were invited to value the propery too.

The key narrative here is help and support. I really like this recent example sent by an agent: “At this early stage, presentation makes the difference between a property that sits unsold – until you are encouraged to reduce the asking price by your agent – from a property that sells almost immediately for its true market value.”

Early on, this agent has begun to sow the seed that – if the property is priced correctly in the first place – they should have no trouble selling, and that they should be wary of being asked to drop the price too soon.

FOUR WEEKS: “YOUR CHOICE OF ESTATE AGENT DIRECTLY IMPACTS THE TIME IT TAKES TO SELL” 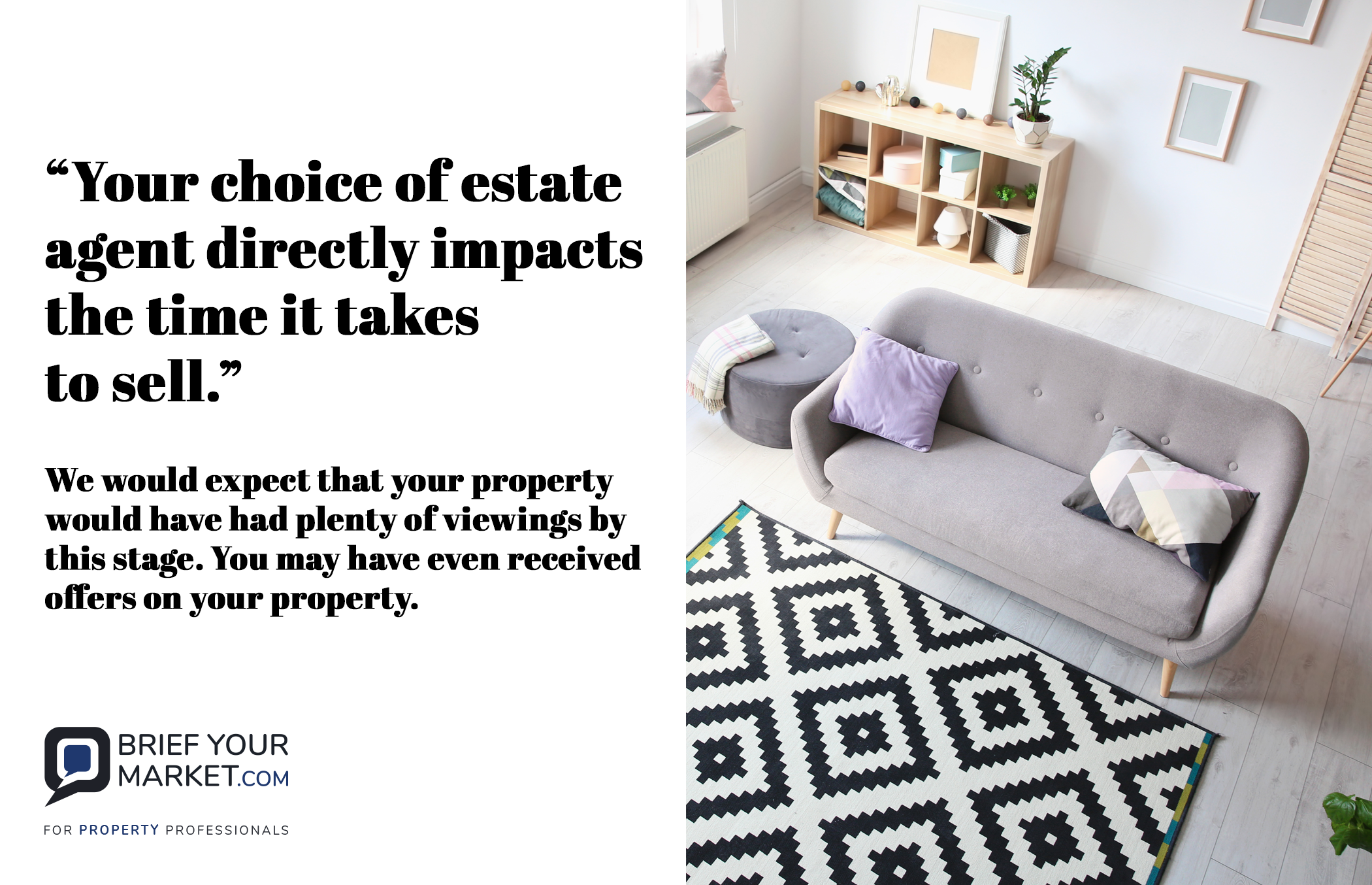 By week four, the seller is still committed to their agent.

However, it’s still a prime time to drop them a message, as it’s fair to say that by four weeks, most sellers will have expected to have received a good number of viewings and constructive feedback.

I liked this recent example, as the narrative here is all geared around: pricing, property exposure, and choice of agent. Is the agent that you are dealing with delivering on their promises?

It’s a great message to get the seller to start thinking about how their choices impact their time to sell too.

EIGHT WEEKS: “IF YOUR PROPERTY IS NOT THE ISSUE, YOUR AGENT MIGHT BE” 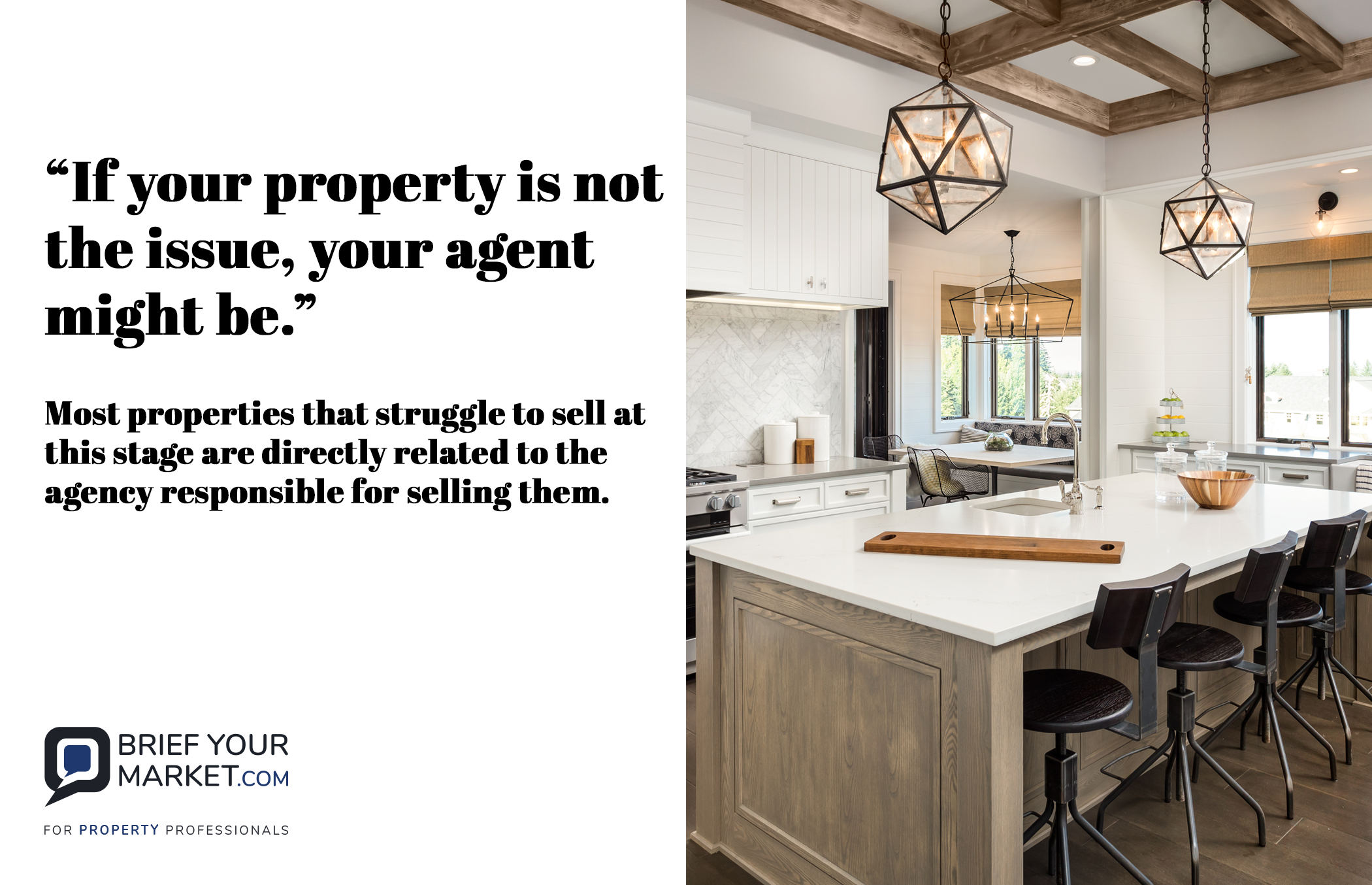 Week eight hits and the relationship is at a tipping point.

Will the agent book a revisit with the seller? Will they change some aspect of the marketing strategy? If not, it’s time to reinforce that the seller’s choice of agent may be an overriding factor in why their propety isn’t selling.

The vendor is probably going to feel frustrated by now, so the narrative here touches on overinflated pricing, empty promises of high service levels and an ill-advised marketing plans.

12 WEEKS: “PRICING MAY NOT BE THE ONLY FUNDAMENTAL ISSUE” 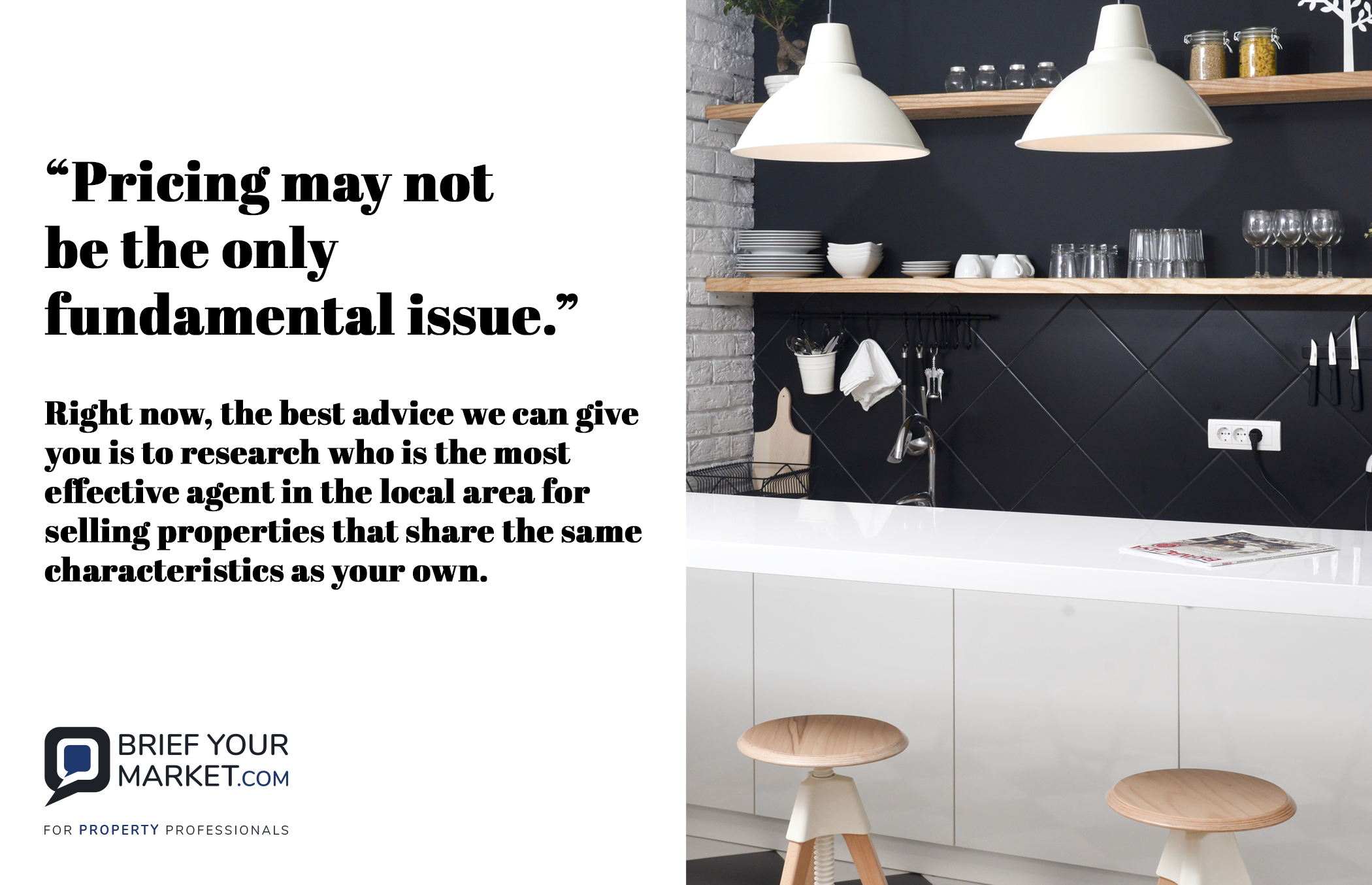 A failure to secure an offer within a sixty-day period is a good indication that there is an issue with the market conditions, pricing, or that the agent is struggling to match the property with a suitable, qualified buyer.

The key theme at this stage is to prime the seller to seriously consider re-evaluating who the most effective agent in the area is at selling a property similar to their own.

16 WEEKS: “THREE FUNDAMENTAL THINGS THAT NEED TO BE IN PLACE” 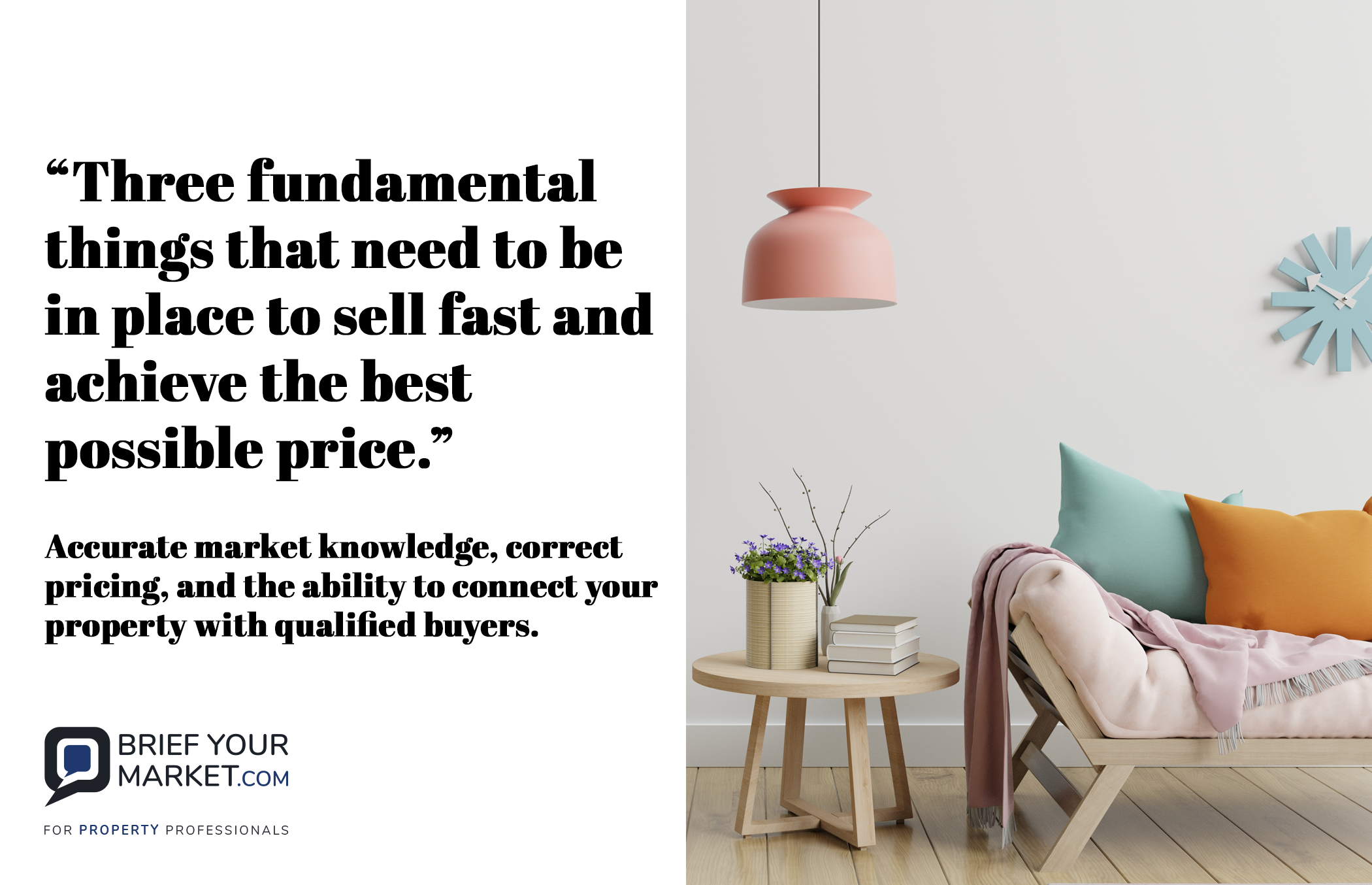 By week sixteen, this agent decided that it was time to turn up the heat and reinforce the fact that three fundamental elements are missing to secure a successful sale at this stage.

The seller will be feeling extreme frustration by this point, so it is time to address their main pain points again: pricing, local market knowledge, and the ability to connect with more qualified buyers than any other agent in the area.

They also included a really nice bonus at this stage too by including their average selling time against the regional average.

I love this narrative from this agent, discussing how reducing the asking price can generate new interest but can also cost the seller £1000s upon completion. Great loss aversion tactic.

The seller is probably going to wonder if their agent has exhausted their capabilities of effectively marketing their property or lost motivation in selling for them.

Either way, a price reduction message provides a great opportunity to promote your services at a really key emotional stage in the selling process. 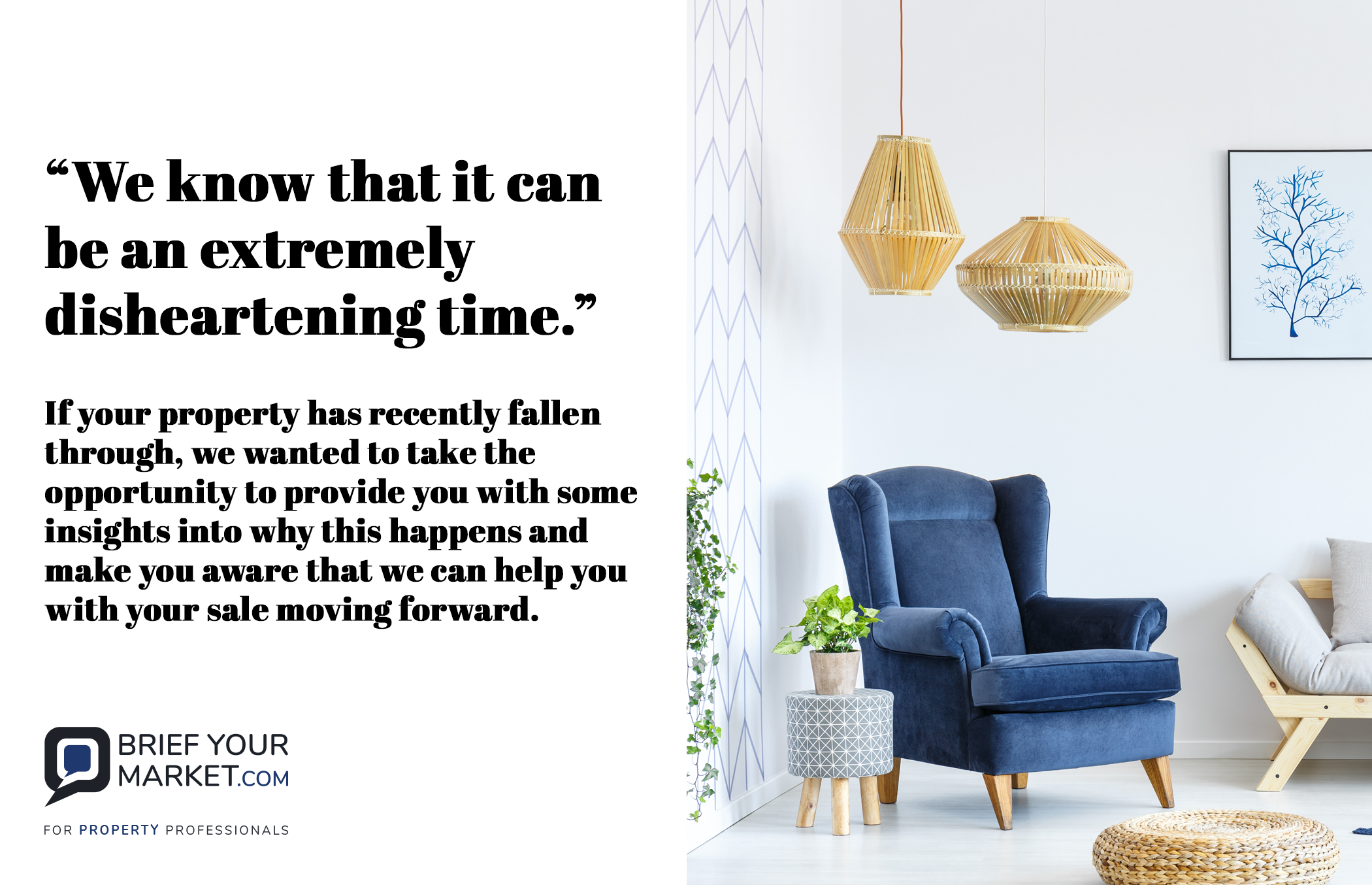 A heart-breaking period for many sellers.

So I personally liked this agent’s angle of offering support and advice on why it happens.

They offer solutions to problems; discussing how mortgage problems can be rectified, how to protect the chain and keep it moving along, why surveys are important, and why delays in conveyancing can be helped by choosing the right agent in the first place.

Again, I loved this recent send; all geared around support.

This communication brings it right back to the fact that their agent should be supporting every property-related decision that the client makes.

It touches on the fact that it might not be the right time to sell, how they may be disappointed by the number of viewings achieved, the initial pricing of the property, and the length of time they have spent on market.

They also offered some helpful advice on how to add value to a property, which I thought was really nice touch. 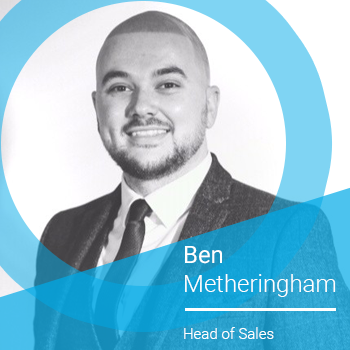 Talk to me about on-market prospecting. Book a meeting today to find out how many instruction opportunities are available in your area right now and how you can target them.

Whether you’re one of our valued customers or if you have liked any of this week’s ideas and want to dicuss how we can help put them into practice for you, book a free and informal meeting with me to talk through your marketing objectives. Simply fill in your details below to request a callback.

Thanks for your time!